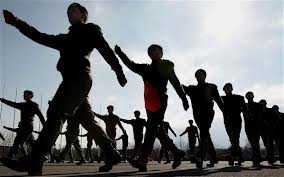 You are a 13 year old boy.  Your Mum does her best.  Of course she was only 16 when she had you, she came straight out of care and didn’t have any family support whilst bringing you up.  As for your Dad.... who? But that’s okay because at least you and your Mum don’t get knocked around like some of your mates.  Your Mum has had a couple of dodgy blokes, but she’s always done what she can to protect you and wouldn’t put up with any nonsense – not even from that dealer who’s your little sister’s father.  You live on an estate where most of the men are unemployed apart from the ones who are dealers or do a bit of thieving to make ends meet.  It’s all very grey but the flat is only a little bit damp, Mum keeps it clean and the microwave works so you have hot meals most days.  There are no books in your house – why would you need any when you’ve got a telly and an X-box your sister’s dad gave her. You try to do the best you can, and stay out of fights mostly

This is your reality.  It has been shown that being in ugly surroundings where you need to conform to survive, your imagination shuts down.

The Government in their infinite wisdom have just announced that they will spend £2million putting military style training into schools, because as Education Secretary Michael Gove says every child "can benefit from the values of a military ethos".

If you cannot imagine anything different, then you cannot achieve anything different.  Perhaps the government should spend a little of this money on ensuring that all children fulfil their potential by teaching them to recognise that they have some!  Even Albert Einstein recognised that imagination is more important than education. I’m not suggesting for one moment that children don’t need boundaries – of course they do – but they also need to be able to imagine what it would be like to do things differently, achieve different things and to set themselves goals beyond the life they know.

In hypnotherapy and NLP we suggest people ‘act as if’ things are different, but if that change is something you can’t even imagine, how can you do that?  Ask a child from a background where experiences are almost entirely negative and restricting what they would like in the future they are likely to focus on what they can have – not what they could be.  They are likely to base any imagination they are able to exercise on what they see on television or the games they play on their games station.  They aren’t stupid, they know the things portrayed in games and on TV aren’t real, but they are a lot more exciting than reality.  Everyone has lots of stuff - they all wear nice clothes and lots of them drive nice cars and live in fancy houses.  They’re all really happy or powerful and they don’t put up with anything from anyone.  Wow – great role models.

I have met children who have not been able to draw a picture or do junk-modelling without being told precisely what they should produce.  They have no imagination left.  Happily I have also seen imaginations being awakened through directed play and pretending to be other than what a child normally is.  A military ethos has its place but surely we should be a little cautious about introducing it into schools?  Surely we would benefit kids a lot more by allowing them to believe in themselves as valued individuals who look to their future desires of being happy, safe, fulfilled and valued by opening their imaginations.

My ‘Imagination clubs’ for children start in January. (Sadly without any Government funding...yet!)